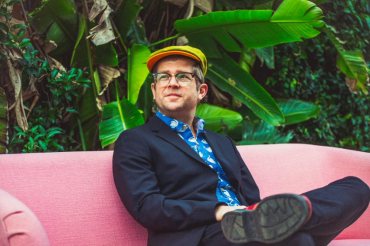 Old Man Luedecke, is one of Canada’s best loved and most intriguing roots singer-songwriters. His memorable melodies, poetic sense and easy charisma appeal to anyone searching for new growth from old roots.

Luedecke is a young man with an old soul, who doesn’t sugar-coat his fears – his songs breathe with bittersweet hopefulness. He channels energy from giants such as Woody Guthrie and Pete Seeger, with maybe a hint of Loudon Wainwright III. But it’s Luedecke’s contemporary lyrics coupled with the irresistible rhythm of the old-time banjo and his thumping foot that make him so loved. Clear and unadorned, his singing suits the sincerity of his tunes. And in the breaks come wild and charming stories of meeting heroes and easygoing but gripping musings on things ridiculous and sublime.

Easy Money picks up where Old Man Luedecke’s award winning, and most successful release to date, Domestic Eccentric (2015), leaves off: four years farther down the road, dreaming about his ship coming in, still a parent but now grappling with the newness of middle age, dad jokes, love for an abiding partner, the death of a parent, along with some calypso-feeling local Nova Scotia history thrown in for good measure.

Composition and recording were both begun at the Banff Centre’s songwriter-in-residence program. It was there that Luedecke met the album’s producer Howard Bilerman of Montreal’s famed Hotel2Tango studio where the album was eventually recorded. The two hit it off when Luedecke composed “Easy Money” on the tracking floor on the first day of the program. Desperate for something worthy to use in his recording time, Luedecke channeled a traditional Christmas number he knew from a Harry Belafonte record and sang largely improvised verses into a winning tune that is sure to be a modern classic: Oh yes I need it, Oh yes I want it, I dream about easy, I dream about Easy money.” Don’t we all.